Visitors to the Wallowa County Farmers’ Market in Joseph on Saturday, Oct. 8, will witness the old-fashioned practice of pressing apples into cider against a background of live old-time music.
A cider press built by Mike Hamman of Enterprise will be used to make cider from donated apples. The press was inaugurated at the Farmers’ Market last year and proved to be a big hit, according to Beth Gibans, the market’s board president.
Music will be provided by the nine-member Homemade Jam string band, specializing in “old-timey” mountain music.
This will be the final Farmers’ Market of the season, and many of the market’s regular vendors will participate, selling produce, beef, soap, bakery goods and crafts. The market runs from 10 a.m. to 2 p.m. at Main and Joseph streets.
The Homemade Jam band first formed to play at the Maxville Gathering in 2010. Although the band has been organized only since spring 2010, the original four members – Lorraine Ragsdale and her husband, Mike Ragsdale; Lorraine's daughter, Sandi Richerson, and her husband, Larry Richerson – have been playing together for many years.
“The band's focus is on old-time, fun mountain music that people recognize and love,” Sandi says. “Toe tapping and smiles is what it's all about.”
Lorraine plays the accordion and other instruments, Mike sings and plays lead guitar, Sandi plays autoharp and Larry plays rhythm guitar. Fiddler Caleb Samples soon joined the band, along with Rusty Woods on bass.
Word soon got out about the kind of music the band was playing, and Laura Skovlin brought her banjo and sweet voice to the group. Later, Sue Juve joined the band with her strong voice, rhythm guitar and fun personality, followed by Ryya Fluit, who sometimes joins the band with her fiddle.
All members live in or near Joseph.
The band has performed at various events, primarily within Wallowa County but occasionally in nearby venues. Performances have included the Bowlby Bash and Watershed Festival in Enterprise, the Wallowa Valley Arts Festival, Eagle Cap Sled Dog Awards Dinner, Mutiny is Brewing, Ember's Brewhouse, antique fairs, flea markets, barn dances, the farmer's market and private parties.

Where's the beef? Here at the market with the wine

As our farmers' markets expand, wine tasting and local beef have joined our regular produce growers and other vendors. And beef gets explained at the Joseph market on Saturday, Aug. 6.
Gilstrap Brothers Winery from nearby Cove has offered tastings and sold wine by the bottle for several weeks now, and has been a popular feature at the markets in Enterprise and Joseph. Gilstrap will be joined by Lathrop Country Wines this week at both markets.

Lathrop is owned by winemaker Scott Lathrop and his wife, Ruby, who also is manager of the Enterprise branch of Sterling Savings Bank. Lathrop recently opened a tasting room in Joseph and, like Gilstrap Brothers, will be offering tastes and wine by the bottle.

Wallowa County grassfed beef similarly has been represented at the Enteprise market for several weeks now by Alpine Acres, the Lostine ranch of Blake Carlsen, who raises "petite beef" with big flavor.

On Saturday at the Joseph market, local grassfed beef – leaner and more nutritious – will be discussed by Sara Miller of Magpie Ranch, from where Bunchgrass Beef comes. Her presentations at 11 a.m. and 1 p.m. will be accompanied with tastes.

A tender steak and some great wine – what could be better? 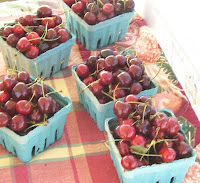 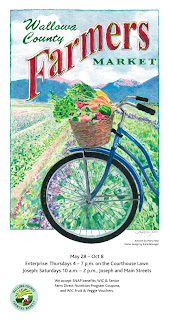 Despite the cool, wet spring, the 2011 season has been heating up at the Wallowa County Farmers' Market.

From our start with the annual Spring Planting Festival on May 28, we've had vegetable plants, greens, radishes, asparagus, spring onions and other early-season vegetables from Beth Gibans' Backyard Gardens and Sherrie Currie's Produce. Recently, strawberries and cherries have appeared, and we expect a much wider variety soon with more vendors. (Remember, we're at 4,000 feet.)

You'll also find a series of demonstrations and presentations from Slow Food Wallowa County (click on the Special Events tab above), kids' activities at the Enterprise Market led by Building Healthy Families and information on the student-tended Magic Garden at Joseph School.

It's all at the Farmers' Market.